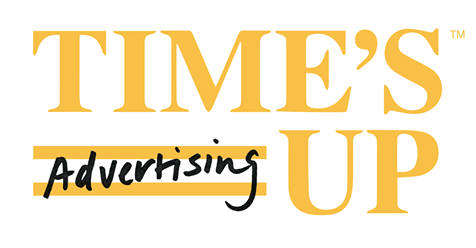 In an effort to shift existing power dynamics, the new charter is the first industry-specific vertical to join the growing TIME’S UP™ movement March 12, 2018 – Today, a group of women advertising agency leaders announced the launch of TIME’S UP™/ADVERTISING, the first official vertical under the TIME’S UP™ movement, which was launched at the end of 2017 by women across the entertainment industry. The ultimate goal is that stand alone TIME’S UP verticals such as TIME’S UP/Advertising help pave the way for every industry to take a critical look at its organizational structure and systemic imbalances to ensure safety and equality for everyone, everywhere. TIME’S UP/ADVERTISING will drive new policies, practices, decisions, and tangible actions that result in more balanced, diverse, and accountable leadership; address workplace discrimination, harassment, and abuse; and create equitable and safe cultures within the advertising industry.

Actions outlined by signatories include:

More information, including the he introductory letter of intent, a list of signatories, events and news can be found at timesupadvertising.com.

TIME’S UP is a unified call for change for women everywhere. From movie sets to farm fields to boardrooms alike, we envision nationwide leadership that reflects the world in which we live. Powered by women, TIME’S UP addresses the systemic inequality and injustice in the workplace that have kept underrepresented groups from reaching their full potential. We partner with leading advocates for equality and safety to improve laws, employment agreements, and corporate policies; help change the face of corporate boardrooms and the C-suite; and enable more women and men to access our legal system to hold wrongdoers accountable. As one of its first initiatives, TIME’S UP launched the TIME’S UP Legal Defense Fund (TULDF)—which has since raised over 21 million dollars to support women and men who face workplace sexual harassment connect with legal representation and public relations assistance.