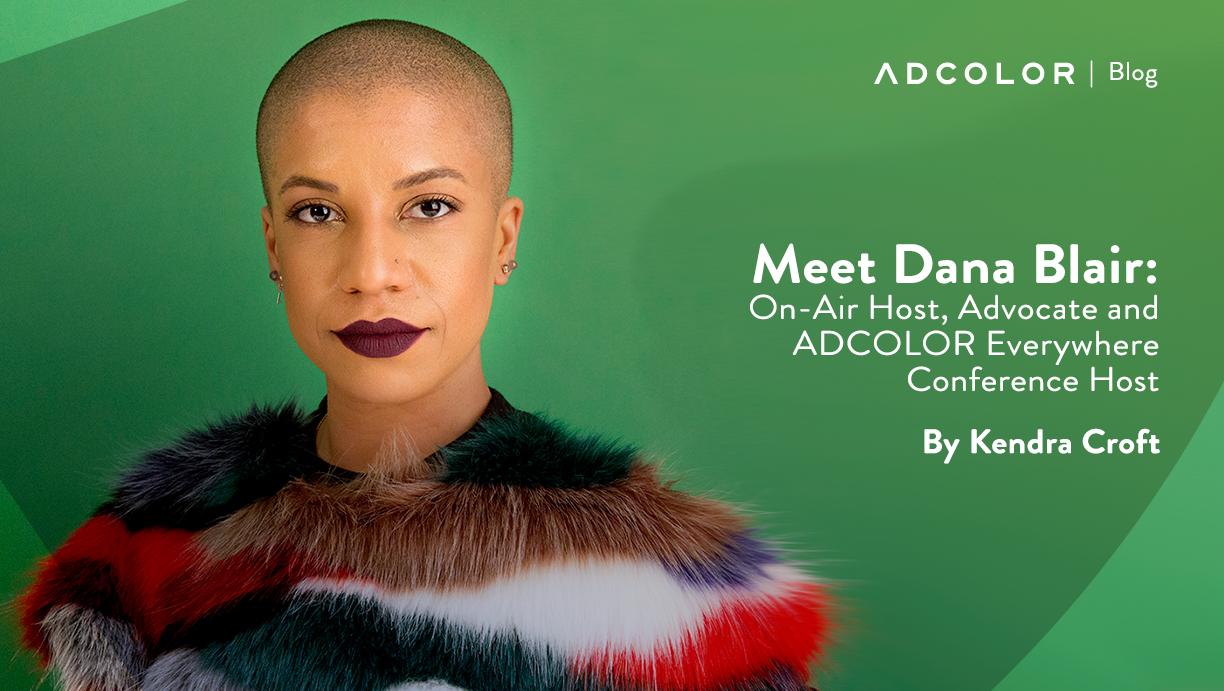 Dana Blair: a blessing, an inspiration and our ADCOLOR Everywhere Conference Host.

I had the pleasure of chatting with her recently and it wasn’t long before we established a family-like kinship. “What’s your mama’s last name?” she asked. Through some dialogue over our creole Louisiana roots, the connection was made and I can officially call her my cousin.

Meeting people that feel like family is nothing new to ADCOLOR. The support, empowerment, honesty and network of ADCOLOR is irreplaceable, and Dana’s journey to becoming our 2020 Conference host is a true testament to that power.

Dana’s career started in the performing arts. At the age of three, her mom was determined to help her do something useful with all of her relentless energy. Dana started in dance. By the time she was 10, she proclaimed to become a professional dancer. Understanding the importance of representation, Dana’s mother introduced her to the first African American principal dancer for the Houston Ballet, Lauren Anderson. As she prepared to enter a profession filled with women who didn’t look like her, representation was at the forefront of her mind. “It’s so important to see yourself. Even though you may feel it’s possible. Even though you know you’re reaching for something that you believe is possible, a lot of times you have to see it,” said Dana. She still has the ballet shoes signed by Lauren within reach of our video chat.

Dana took her talents to NYC on a dance scholarship where she received a performing arts degree with a minor in business. After a hip injury, Dana was no longer able to dance and so, she pursued an MBA in marketing from Adelphi University. As she entered this new phase of her life, she recognized a deep passion for fashion. She decided to further her education by attending Parsons School of Design for Fashion Marketing. This path led Dana to an internship at Vogue and ultimately to working for Essence in integrated marketing. While freelancing at Essence, someone saw something in Dana that she hadn’t seen in herself: a career as an on-air host and personality. As Time Inc., who owned Essence Magazine at the time, was gearing up content for all of its properties, Dana was hand-selected to audition as a host for Essence Live.

She accepted and rose to the occasion. Initial uncertainty seemed to float away. “From the moment that light came on and that teleprompter hit, I was like ‘oh, this is what I’m supposed to do’.” Through performing arts, business and fashion, Dana realized that her experience had prepared her for this moment.

Throughout this journey, she was supported by the power and network of ADCOLOR. In fact, when Dana made the brave decision to leave Essence Live, she consulted with one person and one person only: Tiffany R. Warren, Founder and President of ADCOLOR; and, SVP Chief Diversity Officer of Omnicom. “I knew she was smart and I knew she wouldn’t give me bad advice. I needed that clarity from someone,” said Dana. Around 2009, during her stint as a sales assistant in marketing, Dana crossed paths with Michele Thornton. At the time, Michele was working for A&E and was the only Black female marketing executive in Dana’s line of sight. Thornton not only served as an inspiration to Dana, but as a resource. Michelle introduced Dana to ADCOLOR. In doing so, Dana was finally able to see herself in the community around her, and sequentially, her own possibilities. “Everyone I met in the organization is just so genuine and bomb and doin’ it,” said Dana. “They’re just so about their careers, and not only their careers, but bringing people in. It was also just so welcoming and inclusive.” This introduction was the beginning of a supportive relationship that would last for over 10 years.

Today, Dana has become front and center, having served as the host for ADCOLOR’s annual Facebook Live Nominations announcements for the past two years. She has also worked the red carpet during the ADCOLOR Awards, conducted interviews with its winners and so much more. As she prepares to take the stage as our ADCOLOR Everywhere Conference host, there is no doubt she’s going to rock it with relentless passion and energy for both the conference and the community attending. When I asked her about this year’s theme, #HereForIt, it was made clear that she’s not only here for it, but all of it.

“I love it because no matter what, ADCOLOR is going to be everywhere. It’s still going to happen. So, I’m totally here for that. I’m here for innovation. I’m here for keeping people connected and providing resources to make it through this time. I’m here for ‘this too shall pass’. If we keep these resources going and we keep sharing this information, when we come out on the other side, we’re not playing catch up from last February. So, four months from now, or six months from now, we’ll be ahead of the curve or hitting that good lean in the curve, versus twiddling our thumbs. I’m here for the present because this time for me, personally, has taught me there really is no time like the present. Not only is tomorrow not promised, but your definition of what tomorrow should have been is not promised either. So be here, be in this moment, and take in all the goodness that you can.” As you can see, diversity and inclusion has played a major role in Dana’s career and continued achievements. She has seen the lack of diversity in performance arts, fashion and marketing. Through ADCOLOR, she was able to find a community that inspired and championed her talents and efforts. That energy has inspired her to do the same for others.

ADCOLOR believes in rising up and reaching back. Dana understands that this philosophy is not only important but necessary for advancing the culture of diversity, equity and inclusion. She actively responds to her messages on social media and offers advice to anyone looking for guidance. We’ve only talked for an hour and she has encouraged me in ways she doesn’t even know. Dana’s passion for representation stems from her small-town roots. From one small-town girl to another, I felt her urgency. “I have an affinity to people who are from rural or small towns. When you’re in a small town, sometimes you feel like you will never get out of there. For me, something I want to do as I grow is create things in small towns for people to have access and be able to touch these amazing individuals who I’ve had the pleasure of touching,” said Dana.

Dana’s influence expands from small towns to big cities, and as she prepares to take the virtual stage as our ADCOLOR Everywhere Conference host, she has a few tips for new attendees. “Be open, take it all in, take notes and download the app. ADCOLOR is a great place to take in information, but also use the space to connect and grow,” she advises.

ADCOLOR is everywhere this year and I welcome you in joining me, Dana Blair and the rest of the ADCOLOR community on September 8-10, 2020. Be sure to register and connect with us at @ADCOLOR on Facebook, Instagram and Twitter to keep you finger on the pulse of what’s going on.