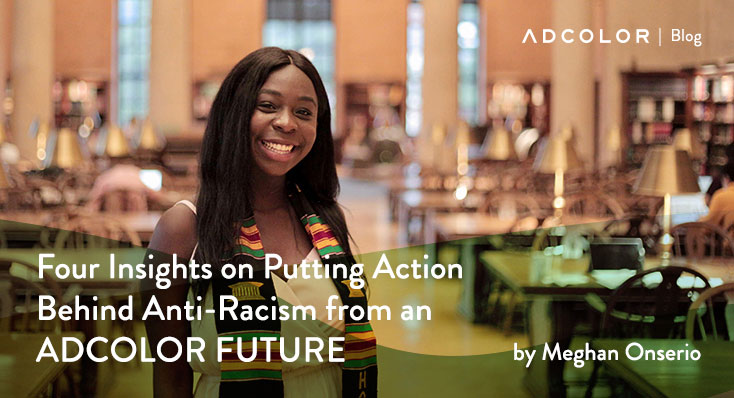 A year ago today I never would have imagined that I’d be writing this blog post. I was a fresh Harvard graduate excited about starting my marketing career at Google. Since then, a lot has happened in my life and in the world at large that has forced me to reevaluate the impact that I want to have. I saw a strong need for an increase in diversity, equity, and inclusion (DEI) in the spaces I occupied, and knew that I had the energy and passion to be a change agent in this realm, but I needed guidance. As such, I applied to become a 2020 ADCOLOR FUTURE with the hopes that I’d further realize my ambitions and make real large scale change in the creative industry. Being selected as a 2020 ADCOLOR FUTURE was one of the best things that happened to me this year. It was not only an honor, but it gave me the confidence to keep pushing for change and to further lean into my leadership potential. While I’ve only been in the community for a short time, I can see that it has already reframed my confidence and inspired me to think more critically about my desired impact.

As part of the experience, FUTURES participate in a Hackathon where they have seven hours to tackle a huge problem and present their solution to a panel of judges. Because everything was virtual this year, we had five days to complete the problem. Prior to ours, I attended the pre-Hackathon panel on, “Putting Action Behind Anti-Racism,”, which featured Ashley McGowan from Facebook, Kiva R. Wilson from Paradigm, Taylor Yarbrough from FCB, and Wade Davis II from Netflix. The 2020 FUTURES Hackathon topic was on racial justice so this event focused on what is means to be anti-racist in the DNA of business practices and day-to-day of your lifestyle. This panel was not only relevant to the Hackathon, but relevant to my growth as a professional and human being. Gems were dropped as the panelists pointed out the many ways in which racism isn’t brand new and how now is the time for companies to really be #HEREFORIT for the long haul.

As someone who graduated barely a year ago, I have a lot of energy and opinions on how to “solve” racism, but I don’t have the years of experience and knowledge on the best ways to go about this. As such, it was helpful to hear from seasoned creatives about their experiences and advice in creating  sustainable change. Below are the main insights I drew from their discussion.

Kiva highlighted that there is power in recognizing intersectionality as identities do not exist in a vacuum. Because people are complex beings, their diverse identities should not be seen as mutually exclusive. For example, I’m a 23 year old dark skinned Kenyan-American woman. At no point am I able to exist solely as a Kenyan, or as a woman, or as Black. My identities are intertwined, which affects my lived experiences, how I move about the world, and the way that I am treated.  I often experience unprovoked comments on one or more parts of my identity which fail to recognize the intersection of my various identities.  I’ve received comments such as: “What do you mean you don’t know when you want kids? Maybe you’re focusing too much on your career” to “You would be more attractive and get further in life if you were lighter-skinned” to “You’re not really ‘black’ because you’re African.” Comments like these are ignorant and show that failure to view a person’s identities holistically is failure to see the person for who they are. At the end of the day, identity plays a powerful role in one’s sense of being and influences how they move about the world. As such, it should be treated delicately and with the utmost respect. Moving forward I hope to build safe spaces which reflect the dynamic, sensitive, and complex nature of human identity.

Ashley mentioned that one way for corporations to address anti-racism is by properly compensating their underrepresented employees equitably. To aid in this process she encouraged listeners to regularly discuss their salaries in trusted social circles as a form of accountability. We live in a world where talking about money and income is seen as taboo, and because of this women such as myself end up getting screwed over. While they may be uncomfortable, I believe that having conversations surrounding salary will give me a more clear image of the playing field, and equip me with the confidence and data to advocate for myself and for others.

Taylor emphasized that a common flaw in DEI programs is the lack of focus on retention. She noted that hiring diverse candidates and bringing them into toxic environments where they’re not set up for success can be damaging and traumatic. As she was speaking, the image that came to my mind was that of a revolving door. There’s no way to make real change if folks are coming in just as quickly as they’re leaving due to empty promises and negative experiences. Looking ahead, I hope to create spaces where underrepresented people feel empowered and set up for success. In order to do that, the standard must be set high before they arrive. Instead of being tasked with the emotional and time consuming job of creating their communities of support, they need to be met with open outstretched arms by people who look like them and those who are committed to creating a culture where they can thrive.

Wade directed us to stop normalizing whiteness as the image of success. Instead, he urged that we use ourselves as the standard and strive towards our own interpretations of excellence. For most of my academic life I attended predominantly white institutions. In those spaces, I was constantly reminded that I was not white, and because I wasn’t white I was told that I needed to work twice as hard to keep up. I now see that that rhetoric, while well intentioned, was toxic. When I look back at all the times I was striving for whiteness, I now see that I was inadvertently stifling myself and my work, losing parts of who I was. I was sacrificing my entire lived experience to aspire to be a “Brad.” I am no longer striving to be twice as good as my white peers because I am enough. I am confident in myself and my abilities to forge my own unique path. I am now striving to achieve what I believe is excellence based on my skills, ambitions, and priorities in life.

As a rising leader, the insights above have influenced the way that I see my past, my present, and my future. They’ve not only validated my experiences but they’ve inspired me to think differently about identity, equity, accountability, and excellence.  With that in mind, I’m energized to push the DEI needle as far as I can. Step one to accomplish this? Slaying this FUTURES Hackathon with my talented cohort at ADCOLOR Everywhere.