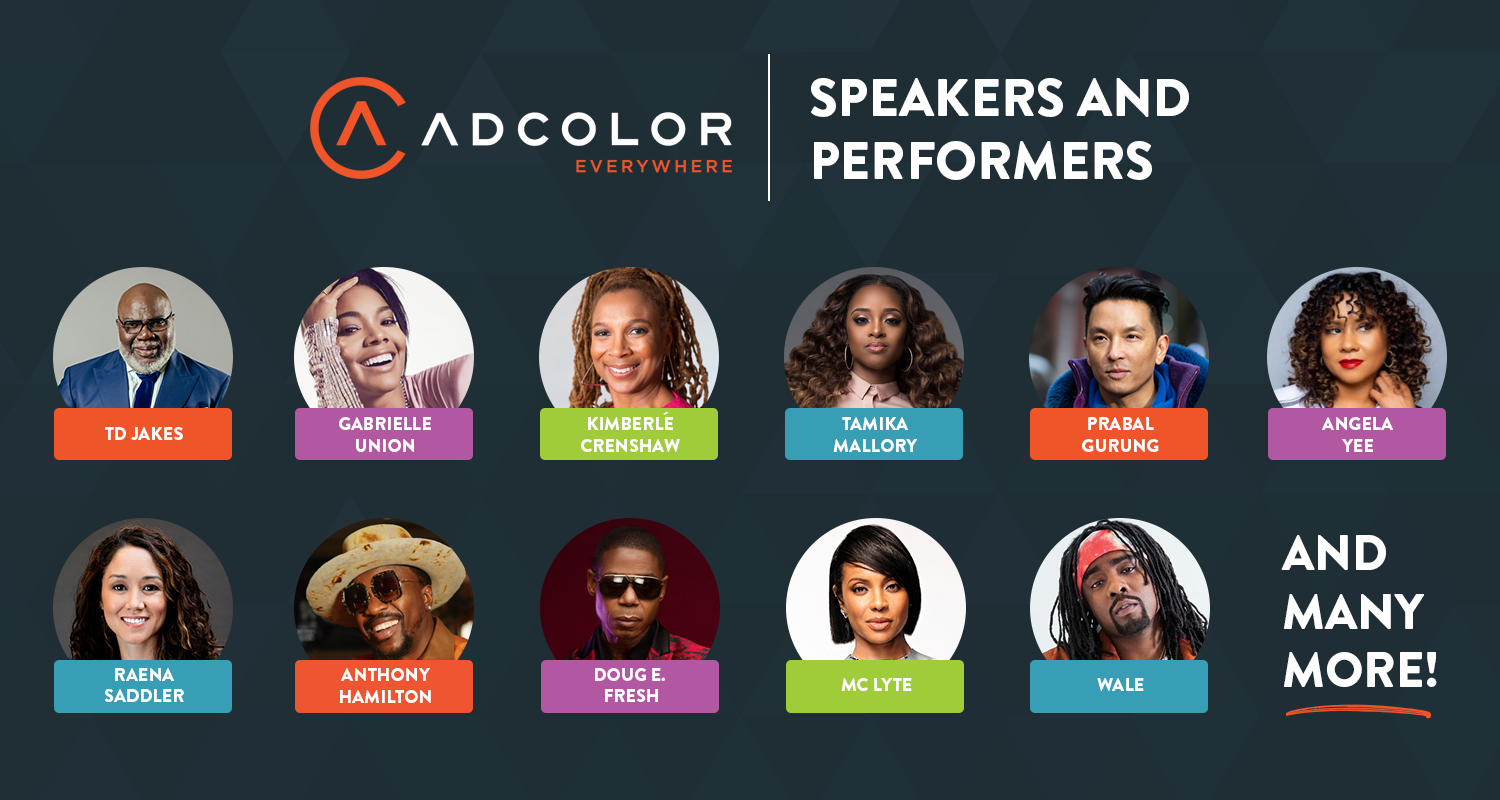 Highlights of the Groundbreaking Three-Day Virtual Experience Include:

A Fireside Chat with Gabrielle Union

ADCOLOR After Dark at the Apollo, Featuring Wyclef Jean

NEW YORK, Aug. 26, 2020 — ADCOLOR, the premier organization dedicated to celebrating and promoting professionals of color and diversity in the creative industries, today unveiled additional details for ADCOLOR Everywhere, with an exciting schedule of events, speakers and performances. The virtual, three-day event will take place from September 8-10th and encompass the ADCOLOR Conference, ADCOLOR FUTURES program and the 14th Annual ADCOLOR Awards. Creating an amplified and dynamic virtual experience for attendees, this year’s event will feature an innovative mix of digital stages, networking and live engagement opportunities for attendees, and nightly entertainment with some of today’s top artists.

ADCOLOR Everywhere will kick off on Tuesday, September 8th with the ADCOLOR Conference, hosted by TV personality and producer Dana Blair. Content will run from 10am-6pm ET, including the ADCOLOR Futures Hackathon from 2-3:30pm ET. Of note, the first day will feature a mainstage session with bishop, author and filmmaker, T.D. Jakes. Also taking the virtual stage will be Chief Diversity & Inclusion Officer of the Recording Academy, Valeisha Butterfield Jones.

The day will end with a special conversation between The Breakfast Club host and radio personality, Angela Yee, and Grammy-nominated rapper, Wale. The conversation, presented by iHeartMedia, will begin at 8pm ET.

Conference content will resume on Wednesday, September 9th with a full day of mainstage sessions. Held from 10am-6pm ET, the sessions will include a noteworthy fireside chat with actress, producer and activist, Gabrielle Union. In addition, there will be a powerful discussion with Color of Change President Rashad Robinson and 2020 Beacon Award honoree, co-creator of the Black Lives Matter Global Network and principal at Black Futures Lab, Alicia Garza. Other must-see speakers include activist and co-founder of Until Freedom, Tamika Mallory; author of Greyboy, Cole Brown; actor and producer, Laith Nakli; and managing director of Wieden+Kennedy New York, Neal Arthur.

The second day will conclude with ADCOLOR’s 2020 After Dark event, a virtual concert by Grammy Award-winning artist Wyclef Jean. The concert will be live streamed from the Apollo Theater starting at 8pm ET and mark Wyclef’s first-ever, complete performance of his Grammy-nominated, Double Platinum album, The Carnival. More details can be found here.

In typical ADCOLOR fashion, ADCOLOR Everywhere will then close out on Thursday, September 10th with the 14th Annual ADCOLOR Awards. In advance of the show, ADCOLOR will be releasing exclusive panel discussions with the 2020 nominees and honorees to “Unlimited” ticket holders. The award show will begin at 7pm ET and feature comedian, actress and writer, Aida Rodriguez, as host. As a special addition, the night will include performances by Grammy Award-winning artist Anthony Hamilton and Grammy-nominated artist MAJOR.

Following the award show, festivities will continue from 10pm-12am ET at the ADCOLOR After Party. The virtual celebration will include a performance by hip-hop legend, “World’s Greatest Entertainer” and “Original Human Beatbox”, Doug E. Fresh. Music for the night will be by DJ Olivia Dope as well as legendary lyricist, DJ, voice over talent, actress and entertainer, MC Lyte. The stellar lineup will close out ADCOLOR’s 2020 event.

“Our annual gathering is something attendees look forward to each year, and by going virtual, we decided to not only offer the same premier experience, but to maximize it for attendees and really push it to the next level,” said Tiffany R. Warren, Founder and President of ADCOLOR. “In addition to our staple events, which include the ADCOLOR Conference and Award Show, we wanted to continue to offer additional perks, such as our after party and concert. By doing so, we’re providing ample engagement opportunities for attendees, and the experience will be unlike anything we’ve seen in the industry thus far.”

To register for ADCOLOR Everywhere, please visit adcoloreverywhere.virtualeventsite.com. Registered attendees will be able to view ADCOLOR Everywhere content from the virtual event site, Facebook and YouTube starting on September 8th. Additional details on the schedule, speakers and performances will be shared prior to the event. Please continue to visit the virtual event site and follow @adcolor on social media for updates.