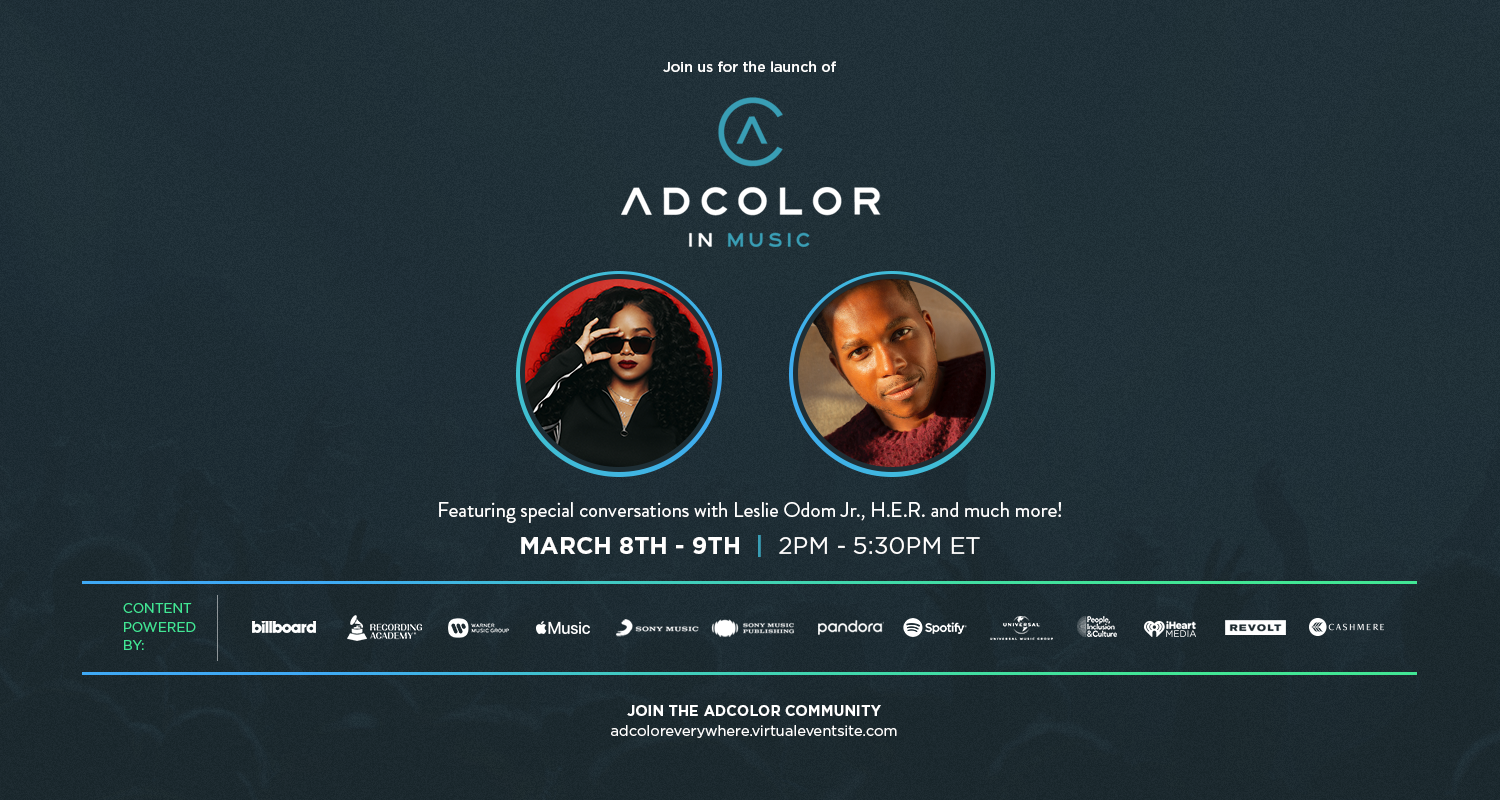 ADCOLOR in Music Announces Inaugural Event and Advisory Board

NEW YORK, March 5, 2021 – ADCOLOR, the premier organization dedicated to celebrating and promoting professionals of color and diversity in the creative industries, today unveiled details for its first-ever ADCOLOR in Music event. The virtual, two-day gathering will take place on March 8 and 9 with content running from 2 p.m. – 5:30 p.m. ET. Registered attendees will be able to view the full schedule of sessions and performances free of charge on the ADCOLOR virtual event site.

This announcement follows the organization’s recent launch of ADCOLOR in Music, an initiative that aims to help diverse professionals in the music industry RISE UP and REACH BACK by amplifying their achievements and creating a space to nurture the next generation of changemakers. The two-day event will feature a variety of industry trailblazers, including Tony and Grammy Award-winning actor and singer Leslie Odom Jr.; Emmy Award-winning TV host, podcast host, actress and producer Zuri Hall; as well as content powered by Apple Music, iHeartMedia, Spotify, Pandora and many more.

“This is such an exciting and historic time for the ADCOLOR organization,” said Tiffany R. Warren, founder and president of ADCOLOR. “It’s a huge milestone to have such an influential industry joining our ranks and embracing our commitment to diversity — on our fifteenth anniversary, no less. I couldn’t be more excited to see how the ADCOLOR community welcomes this new group and to witness the positive change that comes from it.”

“From an ADCOLOR Award winner, performer and speaker, I’ve been a part of the organization in a variety of ways,” said MC LYTE, recipient of the 2015 ADCOLOR Catalyst Award. “I’m honored that I have the opportunity to continue this journey with ADCOLOR by becoming co-chair of its new Advisory Board. I’m ready to introduce music professionals to its mission and show them the unmatched community and space ADCOLOR offers.”

“ADCOLOR’s motto of ‘Rise Up, Reach Back’ hits home with me,” said Michael L. Bivins, who headlined ADCOLOR’s first-ever ADCOLOR After Dark concert in 2019. “Too many times I’ve seen talent of color being overlooked, underinvested in or just simply not granted the opportunities they deserve. As co-chair, I’m ready to call in the music industry and create positive change for those behind me.”

To participate in the ADCOLOR in Music event, please register at adcoloreverywhere.virtualeventsite.com. Additional details on the schedule, speakers and performances will be shared prior to the event. Please continue to visit the virtual event site and follow @adcolor on social media for updates.